‘SnowGhost Stories of Sound’ pilot episode, INTO THE DARK to debut at Google’s ‘Playtime’ developer conference

We are excited to announce the upcoming release of our spatial audio content series called ‘SnowGhost Stories of Sound’. This VR content series utilizes audio as the driver of narrative to tell compelling stories in multi-channel spatial sound. Unlike a traditional audiobook or podcast, the SnowGhost experience is designed to transport the listener into the story or scene as if they were actually there. For context, consider the storytelling format of Prairie Home Companion, in which the author or storyteller is able to expand their characters and plot using rich audio content to create a theatrical experience that is much larger than the story’s words. Utilizing the spatial audio format, SnowGhost elevates the audio storytelling experience to a new level.

SnowGhost will debut their first episode, ‘Into The Dark’ , at Playtime 2017, Google Play’s annual developer conference. The event will take place October 19th at Envelop, a live spatial audio event space that is located in The Midway in San Francisco’s bourgeoning Dogpatch neighborhood and will be experienced exclusively at Playtime 2017. 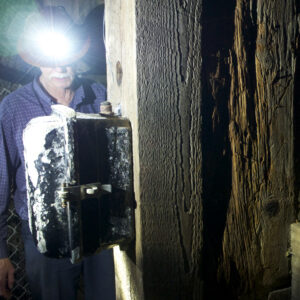 It is really interesting to me that throughout history, man has creatively used sound triggers of tone, resonance and variation as language. Such was the case for the miner working in the early 1900s. There were not only codes based on how many times an alarm was sounded, but also by the tone of the alarm itself. Each mine in Butte was given a signature alarm tone that signified an emergency in a particular mine. The number of alarm rings was an indicator of what type of emergency was taking place. Like morse code, or any other simple sounds that have been alphabetized, our ability to write a simple language using audio triggers that indicate a specific occurrence or circumstance has proven to be quite effective over the years. Flash forward to today, in the age of smart phones, each person has the ability to personalize their ringtone in such a way that it lets them know that it is their phone that is ringing in a room full of people with similar devices. It is the modern day version of the ‘squawker’. The squawker is the black box that is featured front and center in the photograph. This was an alarm system that had been assigned codes and a unique tone that represented specific circumstances or requests. The miner who ran the squawker was one of the higher paid workers in the mine since he needed to be educated in order to operate the machine. We did record the actual squawker in the Granite Mountain Mine and used it in ‘Into The Dark’. It is not the type of sound one would expect to hear in an emergency, it is quite ‘trebly’, shrill and high pitched. Either way, our tour guide was kind enough to oblige us in sounding the alarm nine times which signified that there was a fire in the mine. 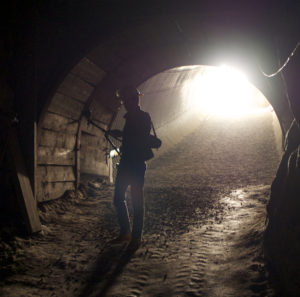 This image is a picture of collaborator Arturo on the day that we went down into the Granite Mountain Mine to do research for ‘Into The Dark’. We recorded, photographed and filmed our trip as we were intent on understanding and capturing what it might feel like to go down into that tunnel day in and day out: with the knowledge of a lot of things that could go wrong on this particular job. Mining is dangerous work. It is an interesting feeling to walk down into the depths of the earth, and yet, it feels fairly normal putting myself in a frame of mind that I’m just ‘going to work’. We often go into extraordinary environments that we accept as normal – it’s what we do to acclimate to extreme situations. The reality is that many things in life are not normal – every circumstance can be unique. It was quite normal at this time for the miners to work with someone who didn’t speak a common language. It was quite normal for miners to walk home from the job in frigid temperatures. The harsh conditions were so normal, and some miners ill-prepared, that they froze to death on their way home. This is what led to the construction of Butte’s underground ‘vaulted’ sidewalks, which were credited with saving many lives of miners coming off the job – especially when they were sweaty and wet after a hard days’ work underground. It was quite normal, when tragedy struck, for many people from all different backgrounds to pull together to rescue their co-workers and friends in the face of tragedy. It wasn’t about race, religious or philosophical differences, or anything else we often consider above ground. In moments like these, stories of human-kindness emerge. It is deeply moving to see how humans will work day and night to save their fellow man in the wake of tragedy, a counterpoint to the many atrocities we perform against one another. On June 8th, 1917, the residents of Butte pulled together and an incredible rescue effort spun into motion, without a blink of an eye. Our day in Butte was incredibly somber and moving, as we attempted to put ourselves in the miner’s shoes, knowing the outcome. Though we only scratched the surface while imagining what life might have felt like for these miners, we left with a deeper understanding and respect for those who had gone to such great lengths to create a better life. 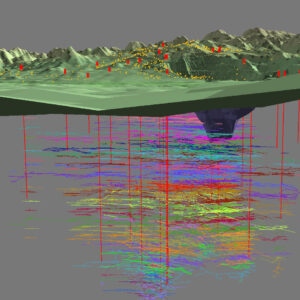 This image was created by the historical society and the colors represent a map of the mine tunnels that lay beneath the city of Butte, Montana. There are over 10,000 miles of tunnels that were constructed to the depths of roughly one mile underground. In the early 1900’s, it is estimated that approximately 14,500 men from all over the globe had come to work in what was referred to as the ‘richest hill on earth’. The miners worked around the clock in shifts as a result of the rising demand of copper due to new advances in communication technology as well as increased demands for metal for the war effort (World War I). Flash forward 100 years from this tragedy, and the town of Butte is still a city that sits on top of what is now more of an underground ghost town and environmental superfund site. The signs of the mining industry are still visibly present throughout the city, without the benefit of the industry to support the residents of the town. Scientists say that despite the fact that many of the support mechanisms for the mine shafts have corroded and crumbled, the integrity of the mine tunnels are preserved by the pressure of the toxic fumes that create enough pressure to maintain the openings and keep the city from collapsing into the mountain. On a fairly regular basis, the residents of Butte will come out of their homes to find massive sink holes in their yards with the wood structure of the mine shafts exposed and visible. Despite the economic depression that has occurred since the mining boom, there is still a strong sense of pride of what Butte was. In speaking with the residents of Butte, there is still pride in the fact that their families helped build that town and had a hand in making it what it became. It reminds me more of a sense of nationalistic pride verses city or regional pride. It is as though Butte existed on it’s own plane at the time, not as a city in Montana, but as an international destination – which it became. It was a privilege to meet and talk with some of the residents of Butte and we thank them for sharing some of their stories with us. 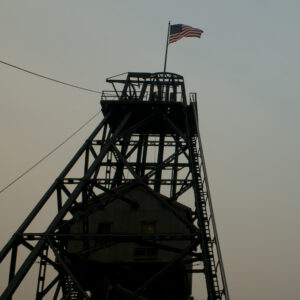 ‘Into The Dark’ – Other Stories of The Granite Mountain Mining Disaster

We are back in the office this week following our debut showing of ‘Into The Dark’ at Playtime 2017 (Google Play’s annual developer’s conference). We are now starting our post-event storytelling effort to shine some light on the other stories that surfaced as we researched the Granite Mountain Mining Disaster of 1917 in Butte, MT (or Butte, America – as it was referred to at the time). At the live showing, we handed out mini-gatefold packets that included information about the piece as well as 10 postcard images of photos that we took from our trip to Butte as we researched this piece. Each image represents another interesting supporting story that surfaced as a result of us digging deeper into the culture and other dynamics that existed in Butte at that particular time in history.

The image above is a photo that we took of the Granite Mountain Mining ‘Headframe’. The city center of Butte is full of these mining headframes, they are visible in every direction. Mining was the lifeblood of the city and the ‘frames’ now serve as more of a reminder of what was. It was incredible to go up into the Granite Mountain headframe and down into the actual mine where this event took place. The Museum of Mining is now located on this site and we were able to facilitate a tour into the mine so that we could record reference sounds, film and take photos. It was ironic to me that the residents of a city that was built on top of a mountain, spent most of their lives underground. They worked underground, drank underground, were jailed underground. Even the sidewalks were built underground due to the harsh winter conditions in Butte. For a city built on a hill, the residents of Butte spent most of their time inside of it. Butte, America in 1917 symbolized opportunity for those looking to make a new life in America. For the immigrants that came in through Ellis Island, you either went to New York, Chicago or Butte at that time. Butte was the most culturally diverse city in Western America, in fact, the no smoking signs in the mine were written in 13 different languages on the same sign. There was real cultural diversity there and the miners learned to speak ‘underground English’, which often times was riddled with profanity that was not suitable for their above ground conversations. There are so many stories to tell, and over the course of the next ten weeks we will be telling the other stories of Butte, America.